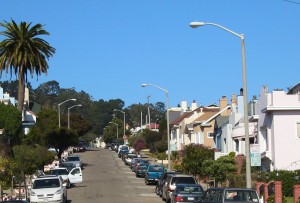 lack of supply and high demand for the number of available homes in West Portal / Inner Parkside is an issue most of the time; there is a predictable lack of inventory that keeps property values up and in demand.  Dot com round two, in the last few years, has accelerated values and created a level of frenzy beyond our normal level of activity. Changes in the marketplace in the last few months have made predicting a home’s value that much more difficult and has left a lot of real estate professionals shaking their heads trying to figure out how to council their clients.  There are lots of theories about why that might be true.  Here’s what I have observed about our neighborhood:

*  Two of the active homes on the market have been on for longer than 60 days, indicating that they are over priced for market conditions.

*  There were no properties that were withdrawn from the market in the third quarter.

*  Of the 24 transactions in this quarter, we had 2 short sales; one active, one pending.

*  In the first part of this year, large down payments and all cash buyers had been dominating the marketplace; I am now hearing more offers are coming in with financing and 20 percent down payments.

*  The number of offers on listings have been dropping for the last few months; I suspect a combination and buyer fatigue slightly higher interest rates.  The holidays will contribute to that slow down as well.

*  As for values, year over year, it looks like three to seven percent appreciation, while quarter over quarter, it looks like we have stayed even or lost a little.  In comparing two comparable homes that sold within a block of each other for the second and third quarters, it would appear that we had a spike in value in the second quarter.  I think we will look back at the second quarter as a high point in the year.

*  Seller tip; if you are thinking of selling your home, use the remaining time this year to prepare your home for sale and be ready to go on the market in February/March of 2014.  We typically see a bump in prices after the first of the year.  Work with your realtor to come up with the to do list and don’t be afraid to spend a little money to make your home stand out in the best possible light.  Remember, once you decide to sell, it is no longer your home; it is an asset that you need to merchandise and market to it’s best potential.

Eric Castongia, Residential Sales Specialist at Zephyr Real Estate provided the information in this article. The content of this article is an interpretation of data from the San Francisco Multiple Listing Service and Eric’s observations in the marketplace.  Eric can be reached by e-mail at Eric@SFHotBuy.com, or via mobile phone at (415)307-1700. DRE Lic. No. 01188380