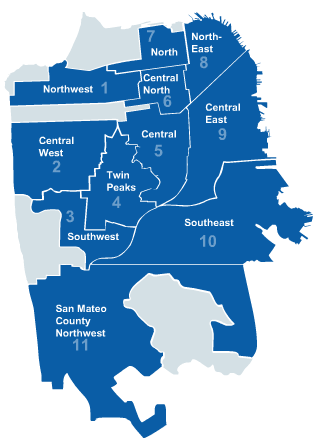 Since its beginning, San Francisco has truly been a city of undeterred human spirit. The city as we know it was “discovered” by Spanish missionaries and explorer’s beginning in 1542. The native peoples, known as the Ohlone, and their way of life, were almost extinct by 1776 when the historic Mission Dolores was built; it still stands today on the corner of 16th and Dolores Streets. 1848 marked the discovery of gold in California and many prosperous (and unprosperous!) miners sought fame and fortune in the wild wild west. The railroad brought even more diversity to the Bay Area through Chinese laborers drawn to California by the US’s promise of the American Dream. Irish and Italian immigrants made their way to the Golden City and prospered in the fishing trade and the influx of people has not slowed since then; San Francisco is definitely one of the most popular destinations in our country. Because of its reputation of acceptance and tolerance and its cosmopolitan and free-spirited feel, a significant portion of today’s San Franciscans are transplants from other parts of the country and the world.

The history of San Francisco is rich with tradition and culture. Devastated by the 1906 earthquake, San Franciscans rebuilt their city a short 9 years later in time to host the Panama-Pacific International Exposition of 1915. The Loma Prieta earthquake of 1989 shook the city once again, reminding San Francisco that change is the only constant in this universe; again San Francisco quickly rebuilt.

The mixing of diverse peoples has lead to the defined and very individual neighborhoods that make up the city. These distinct neighborhoods afford San Francisco a tight-knit community feel within big city walls. Surrounded by water and the stunning architecture of the Bay and Golden Gate Bridges, San Francisco is one big panoramic view with a mild climate. The foggy romantic nights and the clang of cable cars are just a few of the trademarks that make this city so beautiful. The days are filled with events and happenings while the nights showcase the cutting-edge developments of the lively art community. Expansion from Silicon Valley has opened up a whole new industry of multimedia and new media in the city , with some of America’s top designers emerging from San Francisco.

The following pages are intended to give you the resources to explore San Francisco. It is by no means a complete guide to the city (I don’t know if that has ever be done!) but should help you in the initial stages of relocation. Please do not hesitate to call with your questions or concerns.

For more detailed San Francisco history, you can visit the San Francisco Historical Society’s excellent site at www.sfhistory.org. Their site is filled with information and links to other sites that offer hidden historic treasures about San Francisco.

Each neighborhood in San Francisco is very distinct, with its own flavor, culture, microclimate, and expectation.  To truly experience this fantastic city, you must spend time in each area to discover its treasures; and believe me, there are many.  In searching the city looking for their next home, people generally take into account price range, convenience to favorite neighborhood hangouts, sun versus fog, cultural diversity, access to work (public transit, freeways, or both) and architectural style.

Neighborhood Street Fairs
Beginning in late Spring, almost every neighborhood hosts its own street fair. The fairs vary greatly from neighborhood to neighborhood and are one of the best ways to get to know the individual flavor and qualities that make up this wonderful city. For example, North Beach hosts its yearly jazz festival which includes live poetry and jazz performances reflecting the jazz and beat era influences, Union Street, known for its high class boutiques and high society feel boasts a street fair of delicious foods and wines. The 24th Street Fair takes place in the heart of the Mission District and showcases Latin culture, art and cuisine, while the Folsom Street Fair brings alternative and experimental lifestyles to the streets of SOMA (South of Market).
Modern Museum of Art / Yerba Buena Gardens
The San Francisco Modern Museum of Art (MOMA) brings interesting and innovative contemporary artists to the public with exhibits ranging from photography to conceptual and installation pieces. Located in the Yerba Buena Garden, the museum is directly across from the Center for the Arts, the Ansel Adams Center for Photography and the Jewish Museum of San Francisco. A recently constructed Children Center with carousel, bowling alley and ice skating rink is also located in the Gardens.
Golden Gate Park
Golden Gate Park is perhaps one of the most spectacular man made parks in the nation. Built upon the sand dunes that once comprised San Francisco, the park is a haven of nature. Golden Gate Park stretches seven miles long from Kezar Stadium to Ocean Beach. There are miles of trails and paths, chains of ponds and lakes and many special dedicated gardens such as the Rhododendron Dell, The AIDS Memorial Grove and Strybing Arboretum. Three of San Francisco’s Museums are located in the park, the M.H. deYoung Memorial Museum, the Asian Art Museum and the California Academy of Sciences.
Coit Tower
Erected in 1933 in memory of Lillie Hitchcock-Coit, fire department lover and San Francisco philanthropist, Coit Tower was dedicated to her memory and to the brave efforts of those who have saved our city so many times. Some say that the design of the tower is meant to resemble the nozzle of a firehose. Inside the tower are many historical Diego Rivera inspired frescoes depicting California life and the view from those heights is panoramic (and unbelievable!), although the walk up may leave newcomers out of breath.
Walk Across the Golden Gate
The Golden Gate has welcomed many travels into the bay over the years and the walk across the bridge is a must for any new resident. Spanning just over a mile across the Golden Gate Bridge offers one of the windiest and best views of both the Pacific ocean and the bay. Historic bronze plaques tell about the brave men who built the bridge and if your lucky you may see workers painting the bridge. The bridge is constantly being painted for as soon as they reach the end, they begin again to stave off the harsh ocean elements.
The Palace of the Legion of Honor
The Palace of the Legion of Honor is a recently renovated haven for fine art. Boasting an amazing collection of Rodin bronze, the Legion of Honor is located on the cliffs of the Presidio. The views of downtown and the ocean add to the visual experience.
View from Twin Peaks
Perhaps the best view of the city can be seen on a clear night from the vantage point of Twin Peaks. This is one view you can drive to!
DISTRICT 1
Jordan Park/Laurel Heights • Lake • Lone Mountain • Presidio Heights • Sea Cliff • Richmond
DISTRICT 2
Golden Gate Heights • Parkside • Sunset
DISTRICT 3
Ingleside • Lake Shore • Lakeside • Pine Lake Park • Stonestown
DISTRICT 4
Sunnyside • Diamond Heights • Midtown Terrace • Forest Knolls • Miraloma Park • Sherwood Forest • Forest Hill Extension • West Wood Highlands • Mount Davidson Manor • Westwood Park • St. Francis Wood • Balboa Terrace • Forest Hill • West Portal
DISTRICT 5
Glen Park • Noe Valley • Clarendon Heights • Ashbury Heights • Upper Market • Eureka Valley • Cole Valley • Haight Ashbury • Buena Vista Park • Duboce Triangle
DISTRICT 6
Alamo Square • Lower Pacific Heights • North Panhandle • Western Addition • Hayes Valley
DISTRICT 7
Cow Hollow • Pacific Heights • Marina
DISTRICT 8
Downtown / Financial District • Chinatown • Civic Center • Telegraph Hill • Russian Hill • Nob Hill • North Beach • North Waterfront
DISTRICT 9
Mission • Bernal Heights • Potrero • South of Market (SOMA)
DISTRICT 10
Bayview/Hunters Point • Mission Terrace/Outer Mission • Crocker Amazon • Excelsior • Portola / Visitacion Valley • Little Hollywood

My clients and I found a mixed-use investment building in their preferred neighborhood, the Mission, that had not sold. The building had several issues, including the seller’s giving illegal rental increases to his tenants. After a lot of negotiation, we… Read more “We were able to sort out the seller’s tenant issues and get the price of the property in line”