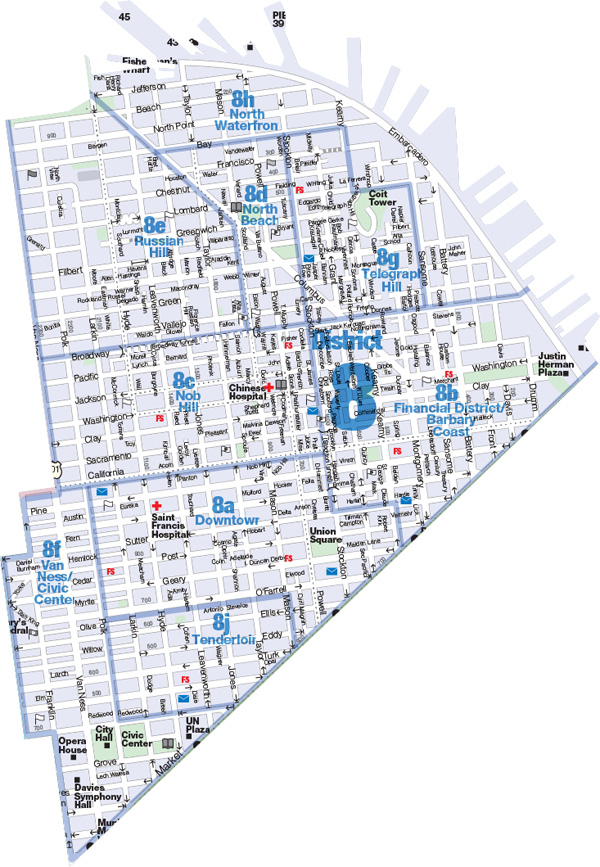 Ranging from seedy to exceedingly swanky, district 8 encompasses a wide cross-section; this is the original San Francisco.

Downtown San Francisco is also known as the Financial District. Although there are housing units downtown, it’s mostly commercial and gets quiet at night. Interestingly, there is a significant portion of the bay that was filled in to increase the geographic footprint of downtown. If you get the chance to see a map showing this, it’s worth it. Story is that pilings were driven into the bay and through whatever was in its path, including through sunken cargo ships. An unofficial adjacent neighborhood is the Tenderloin, which is quite gritty.

Chinatown is directly adjacent and is very active at all times of the day and night. Very colorful, eclectic and dense. You’ll feel like you are in China; don’t miss it.

North of Downtown and Chinatown are the toney areas of Telegraph Hill, Nob Hill and Russian Hill. Make sure to spend time getting lost on the hills, including taking stairway walking tours-exhausting but fun and make you feel like you are in old world San Francisco. There are some homes in this area that are only accessed off these stairs.

North Beach and North Waterfront are in the flat section of District 8, adjacent to the bay. Historically home to San Francisco’s Italian population, you can still find plenty of Italian restaurants and coffee shops. Make sure to go to Caffé Trieste on Vallejo St., as well as Original Joe’s and Acquolina on Washington Square.

To the west is Civic Center. This is the home to City Hall and United Nations Plaza and the former auto row (Van Ness Ave.) There is a large collection of mid to high-rise condominium complexes in this area.

Each of these areas have their own commercial hub with their own personality.

Eric went out of his way

Eric went out of his way to make sure we were well informed of the market as a whole; working with Eric is like getting a mini real estate education.